The Current State of 4K 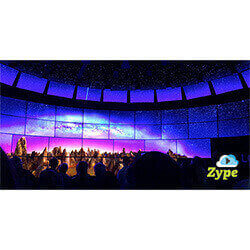 Do you own a 4K TV? Do you work with 4K video content? Do you know anyone who does?

According to Multichannel News , 4K is on the rise with consumers. Does that mean it’s finally time to take the plunge into Ultra High Definition, or are we still at the ground level? Let’s take a look at a few things that could be holding people back from going 4K. Let’s start with money.

For consumers: On one hand, the cost of a 4K TV set has gone down considerably. Some of the better-reviewed models, like this Vizio, have been seeing near-$600 price tags and 55 glorious inches. Black Friday has also come and gone, with insane deals on 4K sets as well (Target had a deal for a 50” 4K TV for $250). As the technology for the sets (and monitors) continues to get cheaper, we’ll keep seeing prices fall into Full HD 1080p range — but you can still find more, and bigger, 1080p TVs for better prices. There is also just flat-out more 1080p content available for consumers at this point, too. Plus, you almost always have to pay a premium for the small quantity of 4K video content that is currently available.

On top of this, you'll need to purchase something to deliver your 4K content if your TV isn't capable through smart technology. You'll need something like a Chromecast Ultra , an Amazon Fire TV , or a Roku Premiere+ if you're bent on streaming (plus, you'll need to make sure your internet connection speed is up to the task, and if your provider caps your data, you might need much more). If you want UHD 4K Blu-rays, you'll need a Blu-ray player that can handle it. That means more money out of your wallet.

For creators: Yeah, it does seem like every new camera available can shoot video in 4K, including the ones you shove in your pockets, like iPhones. The real cost of professional-level 4K lies outside of baseline ability, and more so in the proper lighting, hardware and lenses, and in some cases, makeup and set-dressing.

If you’re a YouTube creator creating content in 4K, did you consider all of the extra detail that viewers will be able to see and pick apart? Meaning, if you’re purposefully doing something low-budget, people might begin to notice just how low-budget you’ve gone.

On top of this, there is so much information packed in 4K that the transport and handling of those files requires more space, faster editing machines, and faster network speeds — all of which cost more money.

For consumers: This is where things get a little iffy for consumers. UHD TVs are great and all, but what’s the point if there isn’t any content?

The amount of available 4K video streaming content is paltry at best. Netflix only has a handful of titles outside of its original programming (shows like House of Cards and Stranger Things were quickly available in 4K), and the same goes for Amazon and other streaming providers. On top of this, it’s usually more expensive to even access these titles. Sure, you could use that new TV to watch sample 4K videos on YouTube (which just added 4K support for livestreams), but we feel like that couldn’t possibly be the only reason you broke out your wallet.

When it comes to gaming, too, 4K is only really widely available to those who are PC gamers with 4K monitors, as those consumers can build hardware powerful enough to handle it. Sony did just release a “Pro” version of its PS4, but even then it’s only playing some games near 4K. It does handle 4K HDR video streaming (but no 4K Blu-ray? Really?), though, and XBOX has tight lips on next year’s Project Scorpio, which might end up being powerful enough to actually play games at full 4K resolution.

That being said, though it might be hard to find 4K content, the libraries are in fact growing.

For creators: This will echo a lot of the cost section (above), as it’s just flat-out cheaper to produce, handle, and deliver content at 1080p and below than it is to offer titles or originals at 4K. Plus, consumers are far more willing to pay for a bigger selection of 1080p content than paying more for just a little content at 4K.

But things are changing — as hardware costs for both consumers and manufacturers begin to fall. According to one panel of 5,364 U.S. adults, 38% can see themselves “ very, or somewhat, likely to use a 4K TV in the future.”

On top of that, it looks like 4K is on track to be in half of households within 4 years. In 2014, only 10.1 million 4K UHD TV units were shipped worldwide, and Statista has 2016 sitting at 48.1 million. So, is it time to make the jump to 4K? Yes and no — yes, if you want to future-proof yourself as a consumer and content creator from what is to come ($52 billion in 2020, according to these industry researchers). The amount of 4K content, while small compared to 1080p, is rising. It's a no, though, if you’re not yet ready to take on the cost, which isn't at its lowest and will certainly continue to fall based on those statistics.

Do you have anything 4K yet?