I’ve been working in streaming television for more than a decade, since my first deal with Netflix on a slate of streaming rights at IFC TV in 2011. What’s fascinating about this current moment in TV, is how hard the pendulum is swinging back towards many of the elements of television once thought at great risk of being left behind: linear, curated, ad-supported. After a decade of subscription proliferation, binge drops and everything always on demand, the business and the audiences are once again embracing some of the most traditional aspects of the TV experience. Even more intriguing, is that they are using the very latest technology to do it.

Be sure to check out our article, FAST Channels: The Complete Guide for 2023 for a more in-depth look into the ins and outs of FAST channels.

Over the past few months, I have been doing a deep drive into a fast-growing segment of the video consumption ecosystem: free ad-supported streaming television, aka FAST. At first glance, FAST might appear to be a major throw-back to OG TV. Linear feeds of mostly acquired content, curated by programmers, and delivered for free, with ads, to audiences who choose a channel and then lean back to watch. And yet…

It turns out that FAST is actually the culmination of both technological innovation and audience evolution. Increases in bandwidth (both on the broadband spectrum and over wireless), advances in backend, cloud-based technology and machine learning, have enabled FAST channels to multiply rapidly, and for their audiences and revenues to mushroom at breakneck speeds. As I wrote in an essay for TVREV about the world of FAST, these channels are combining for more than 200 million hours of programming watched each quarter, and rising; and a CTV universe that generated more than $2 billion in revenue in 2021, on its way to more than $4 billion projected for 2023.

In the TV/REV piece I debuted a map of the current free ad-supported streaming television landscape, which (for obvious punny reasons) I call the FAST Track. Here is a slightly revised version: 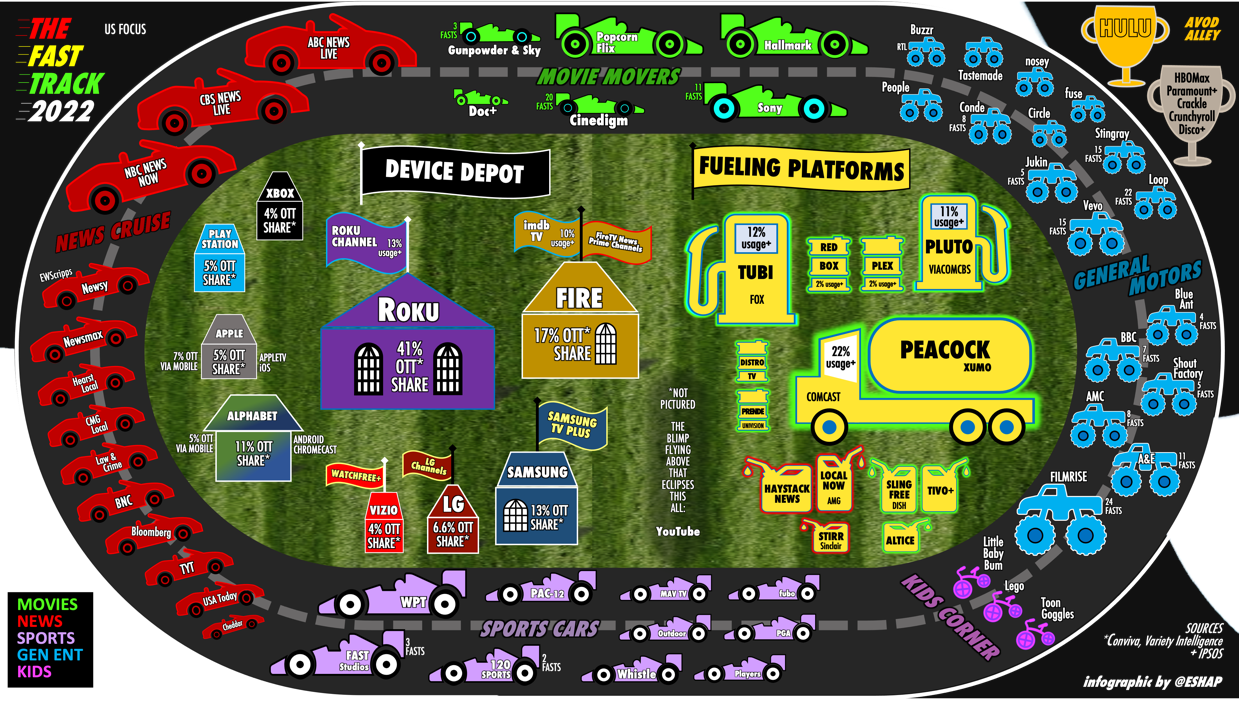 This map tracks just the largest (Tier 1) players in the race – with many dozens of channels and services not shown. Which leads me to the major issues currently facing this sector:

The mad dash to launch FAST channels has created an abundance of content offerings, in an ever-expanding set of walled gardens, engendering a paradox of choice and a daunting labyrinth of discovery and an utter lack of unified data. The sheer volume of offerings combined with a lack of organizing principles around the platforms, makes it very difficult for the two most important constituencies – audiences and advertisers – to enjoy the benefits that FAST intends to offer. While large aggregator platforms like Roku, Pluto, Tubi and Peacock are seeing substantial viewership and revenues, many individual channels are finding it hard to find viewers, and many marketers are left confused on how best to enter the market.

So that’s the bad news. Now for the good news:

There is a major push for professionalization in this sector: what I call the Televisioning of FAST. Both in researching the TV/REV piece and moderating a recent panel (add link) with experts in the FAST field, I have found countless examples of important and necessary improvements in the quality of the FAST experience – in all aspects of the business. Major initiatives in live News by players like ABC and CBS; investments in original programming by companies like FAST Studios and Gunpowder & Sky; and professionalization of operations by companies like IRIS.TV and ZYPE; all point to a maturation of FAST that will make it a more rewarding platform for content consumption, advertising effectiveness and revenue generation.

This will be extremely positive for programmers serious about making FAST a real business; for advertisers looking for new and innovative ways to reach audiences in quality environments; and for viewers looking for content to fill out their TV diet. It will be far less positive for those looking to use FAST channels to make a quick buck on a hobbyist budget. Without the affiliate fees that Cable/Pay TV offered, FAST is even more (aka entirely) reliant on ad dollars to create revenues and profits. Increasingly, advertisers will look for more than the drive-by sampling that is prevalent in on FAST today. To succeed, channels will need to demonstrate regular, recurring and even appointment viewing (a throwback TV term if there ever was one), rather than metrics like Monthly Average Users, or minutes viewed.

Conversely, for progressive brands (marketers) who invest their ad dollars into standing up their own channels to engage their consumers and promote their products and services, FAST could be the best of all worlds: A direct content channel that you control, which engenders deep engagement from targeted audiences. Think about this as the ultimate evolution of the infomercial – from “paid programming” to “Brand-owned-and-operated” programming channel.

As I’ve gone on this drive-thru of the FAST ecosystem, I’ve often been asked “linear feeds of programming, curated by schedulers… isn’t that just TV?” The answer (like so many things in the Modern Media Wars for Attention) is complicated. FAST wants to have everything that the heyday of TV offered – quality programming environments curated for audiences by content providers, for a lean back experience that’s enjoyable for viewers and effective for advertisers. However, the addition of today’s technology allows for the dynamic ad targeting that Cable TV promised, but never truly delivered; as well as a customizable platform that solves the viewers’ paradox of choice. In its ultimate actualization, FAST could be the “yes, and” of OG TV.

Does FAST do these things today? In some ways yes, in others, not so much… yet. But, we are in the very early laps on the FAST Track. After tooling around the track with some very savvy drivers, my prediction is that, in 2022, FAST picks up speed and races towards real progress. 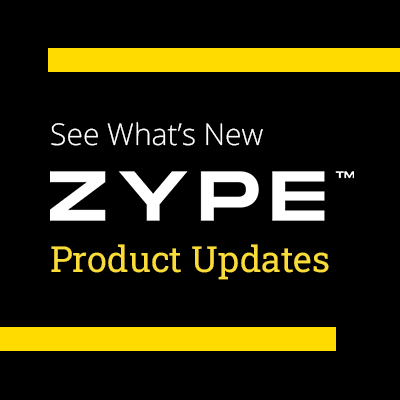 We're focused on building the most comprehensive end-to-end video infrastructure platform available to help you... 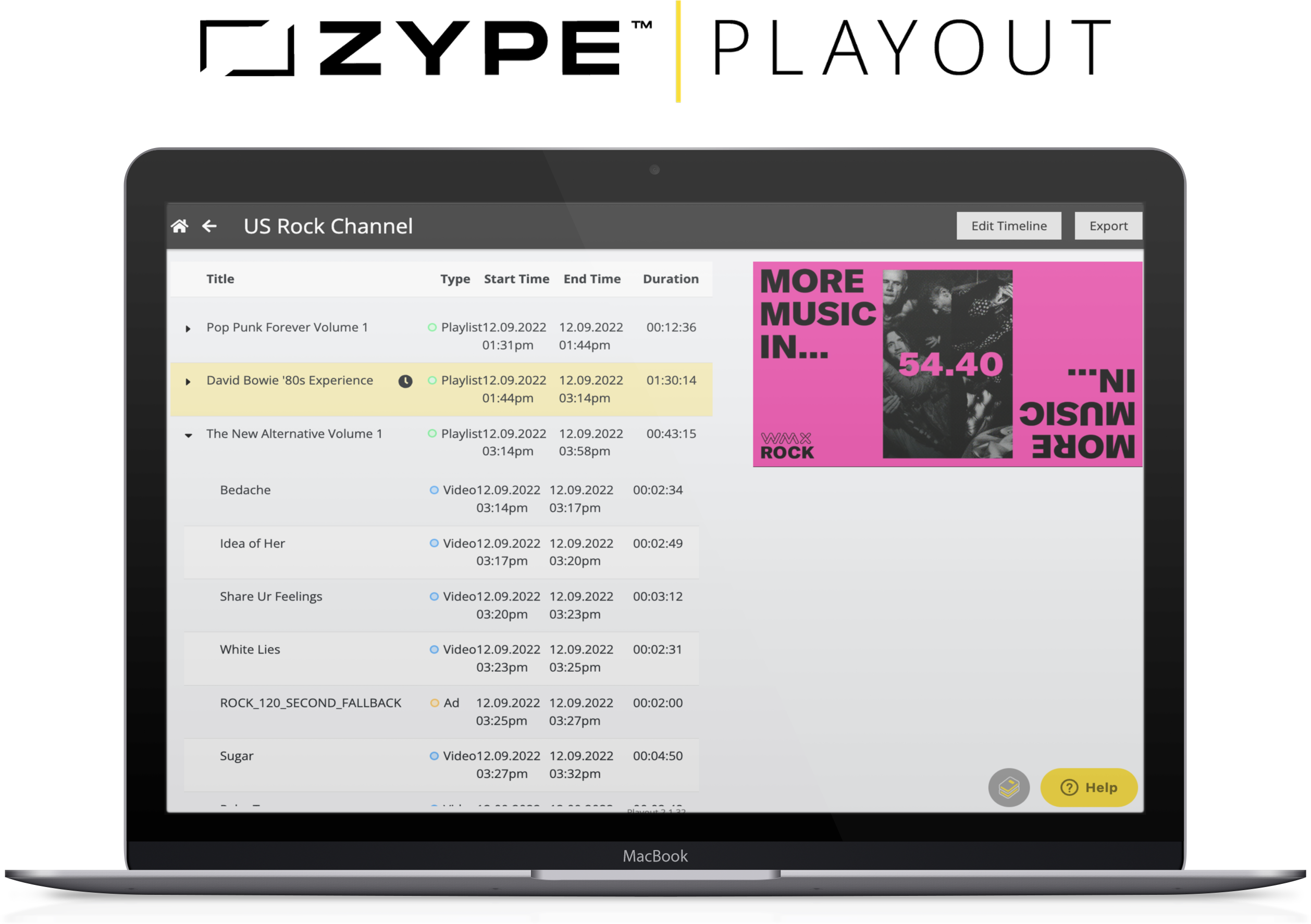 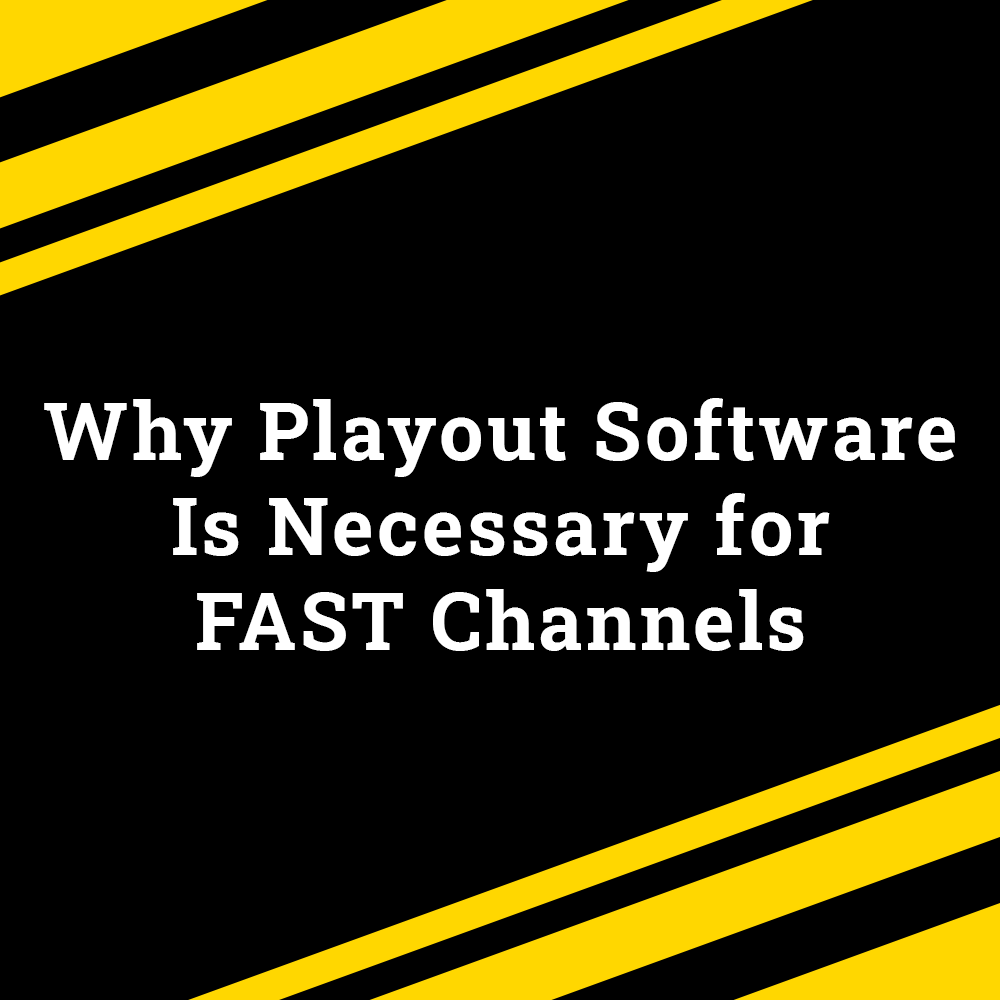 If you’re serious about video content and ensuring yours gets in front of the right people, at the right time, and on...