OTT Got You Lost? Here's An OTT Terms & Acronyms Glossary To Help Find Your Way 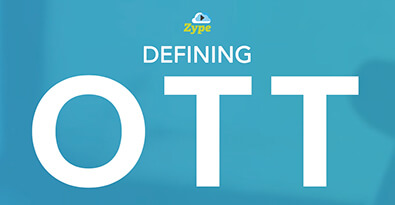 Change is no longer on the horizon — change is here. The entertainment and technology industries are responding to a market that is rapidly embracing cord-cutting and dropping middlemen. There have never been as many opportunities for your growing video business as there are right now .

But the OTT space is still so new and that in itself can be daunting. There will be new learning experiences during this veritable gold rush of opportunities, including new terminology and phrases that might not make sense for you right out the gate. We’d love to take the edge off for you.

Staying up on the trends might be hard, but here is a quick and simple guide to some of the most common — and more obscure — OTT terms, acronyms and phrases you will need to know as you take your video business over the top and online for your fans and customers.

Over The Top // This is the no middlemen, direct-to-consumer, internet-based delivery for content. Example: StarTalk All Access’s Roku app is the OTT destination for all things science.

Video On Demand // If the programming isn’t live, and the consumer is choosing the content to play, this is Video on Demand. Example: Night Flight has some of the best horror VOD in the land.

Application // These are the programs you download to hardware and ecosystems from their given stores. Example: Just grab the new Anthony Cumia app from the App Store and start watching already.

Set Top Box // An internet-connected device that streams OTT video. Example: The Apple TV is one of the most popular STBs on the market.

Apple TV Operating System // This is Apple’s software for their Apple TV set-top box. Example: Have you updated to the new tvOS yet? I hear Apple added some functionality.

Online Video Platform // A place for users to upload, store, and distribute content online. Example: The key is to find the right OVP for your business so you can monetize and scale.

Direct To Consumer // When your content skips over the middlemen and goes directly to the consumer. Example: Netflix doesn’t need to find a TV channel to show their content, they’re already DTC.

Advertising Video on Demand // Using advertising as a form of monetization. Example: Hulu’s tiered AVOD system seems to working just fine for them, I’m not sure I know anyone who has gone commercial-free for more money.

Subscription Video on Demand // Using subscriptions as a form of monetization. Example: Netflix subscribers climbed due to Stranger Things being a hit, so their SVOD service is doing really well this quarter.

Transactional Video on Demand // Using transactions (purchases, rentals, etc.) as a form of monetization. Example: The iTunes Store lets me own or rent movies, and makes money off that TVOD service.

Multichannel Video Programming Distributor // This is something like a cable provider — a service that delivers packages of TV channels. Example: Comcast is one of the biggest MPVDs in the industry, offering packages past 200 channels.

Augmented Reality/Virtual Reality // The latest ways to view content, usually with the help of technologically advanced goggles or headsets, or using the camera on mobile devices. Example: Playstation’s VR headset is the least expensive AND has a bunch of content ready to go.

Electronic Sell Through // This is when you sell content online for unlimited viewing. Example: If you purchased Die Hard through iTunes, that transaction is considered an EST.

Content Management System // This is the backend software you use to manage your content, like Wordpress. Example: Zype’s dashboard is a single-pane-of-glass CMS that lets you control everything from distribution to monetization and analytics.

Internet Protocol Television // Delivering your content or programming over the internet in encoded “IP packets.” Example: IPTV is changing how we watch TV — straight through the internet.

Real Time Messaging Protocol // Originally proprietary tech for sending audio/video/data between Flash players and a server, Adobe has since purchased it and partially-released it for everyone. Example: If you want high-quality VOD and live media, I would consider looking into RTMP.

Variable Bitrate // A certain kind of bitrate used in sound/video encoding, but the files vary the output data for each time segment. Example: It might be slightly slower, but a VBR is going to give you wonderful quality during your streaming.

Constant Bitrate // When compared to “variable” bitrate, CBR is a codec’s constant data output. Example: Unlike VBR, CBR handles audio faster, but then you don't get great optimization for storage and quality like VBR.

Digital Rights Management // This is copyright protection for digital media. Example: The DRM on this video is super strong, I can only play it on my own devices, logged into my own account, and I can’t share it with anyone else.

Cost Per Thousand Impressions (The "M" is the Roman numeral for 1,000) // A commonly used form of measuring in advertising, denoting the price of 1,000 advertisement impressions on one webpage. Example: The CPM for that ad is right around $2 for every 1,000 impressions.

Digital Ad Ratings // How you ads did online and mobile, like Nielsen’s TV ratings. Example: One of the best ways to gauge marketing ROI is to use Nielsen’s DAR and find out the next day how your ads performed.

Roku Ad Framework // Advertising on the Roku set-top box. Example: The RAF wants to help you monetize by putting video ad functionality right into their SDK.

Monthly Recurring Revenue // How much money a company can predict to make every 30 days, or every month. Example: In 2016, we really took off: our MRR was approaching $16,000!

Video Ad Serving Template // A standard for communication requirements between ad and video players. Example: Before an ad can be delivered, first the video player needs to launch a request to a VAST ad server.

Video Player Ad Serving Interface Definition // A common interface between video players and ad units. The ads then can be interactive in-stream. Example: Stacking the VPAID on top of VAST gives you a more robust ad experience, as VPAID will allow an ad to be executable.

Video Multiple Ad Playlist // If you don’t control the video player or distribution outlet, VMAP is an XML template you can use to set up the “structure” for ad insertion. Example: You should look into using VMAP to place ads and maybe your audience won't get so annoyed with the breaks.

Interactive Media Ads // Video-based ads that can be linear or nonlinear, like banners. Example: Google IMA is going to serve us linear ads mid-roll, as customers seem to be okay with natural ad-breaks like on television.

Real Simple Syndication // A few bundled feed formats used to publish things often, like blogs, news headlines, audio, video, etc. Example: Feedly will swallow all of your favorites RSS feeds and present them for you in an easy and readable fashion.

Media Real Simple Syndication // This is an RSS extension that syndicates multimedia files like audio, video, and images in RSS feeds. Example: You can use MRSS to import videos into Zype.

Software Developers Kit // This is what programmers use to write applications. The programs usually include ways to edit and test how new apps and functionality work. Example: The new Android SDK makes it super easy to build apps, but it also makes it easy to side-load the new OS updates.

HTTP Live Streaming // From Apple, this streaming communications protocol is part of QuickTime, OS X, iOS, and Safari. Example: If you had to choose between HLS and RTMP, which would you choose?

Hyper Text Markup Language 5 // This is the 5th and current version of HTML, which is the language used to show the world things on the internet. Example: All YouTube videos now show using their HTML5 players by default.

File Encoding/Compression // When exporting video, you must choose a form of encoding, compression, and file extension. You would choose one of these based on what you plan on doing with your files, specifically video. Example: H.264 is the one of the most commonly used ways to record, compress, and distribute you business’s video content.

Apple Lossy Video Compression Format // A compression format from Apple that supports up to 8k, used mainly in post-production. Example: We have all these files in ProRes, time to load them up into Final Cut Pro and get to work on editing them down.

As you enter the brand new maze of OTT video that has seemingly grown overnight, you’ll quickly realize there’s no map at the entrance before you step in. It’s all new and there is no “right path” when every direction seems to change at will. We hope this will help you find your way through the first few bends and dead ends, but there is much more for everyone to learn.

Request a demo with Zype and we’ll walk through the maze together, creating our own path to your success.

If you want to dive even deeper, grab a copy of Zype's latest white paper and ultimate guide: OTT and Beyond!